The Case for Distributed Space Robotics

With NASA’s announcement of funding for swimming robotic swarms to explore oceans on other solar system bodies, the importance of distributed space robots has become more apparent. As reported, the $600,000 in funding will seek to evaluate the feasibility of these swarms of miniature swimming robots to explore the regions beneath the ice on bodies such as the moons of Jupiter, Saturn, and even Pluto.

As scientists continue to look for signs of life beyond Earth’s atmosphere, bodies with liquid water covered by an icy crust continue to be intriguing possible places to look. However, the millions of miles that separate these vast oceans from our own oceans means robotic explorers will need to be employed. But, sending a single robot to explore these oceans would prove ineffective, which is why NASA is considering the use of robotic swarms.

These swarms, made up of hundreds or thousands of small, individual swimming robots, would land on the surface, bore through the ice, and then disperse throughout the ocean to search for signs of life. What makes this method so attractive is the combined exploration capability of these multiple robots, which would form a distributed network capable of exploring more through interlinked communication abilities.

Distributed robotic swarms are not new, having been utilized on Earth for their search and rescue and exploration abilities. However, deploying a swarm of robots to a location millions of miles from Earth adds additional challenges. These robots would need to be designed to operate completely independently in environments far harsher than any on Earth, coordinating their exploration to cover the largest part of oceans spanning entire bodies.

Robotic swarms have the potential to help advance space exploration in areas other than extraterrestrial oceans. For example, a swarm of flying robots based on the Mars 2020 Ingenuity helicopter design could be used to traverse vast expanses of the Martian atmosphere, coordinating their exploration and returning to Earth orders of magnitude more data than a single robot. A distributed robot swarm of micro-rovers could explore caves and lava tubes on the Moon, going places deemed too dangerous for Artemis Program astronauts. 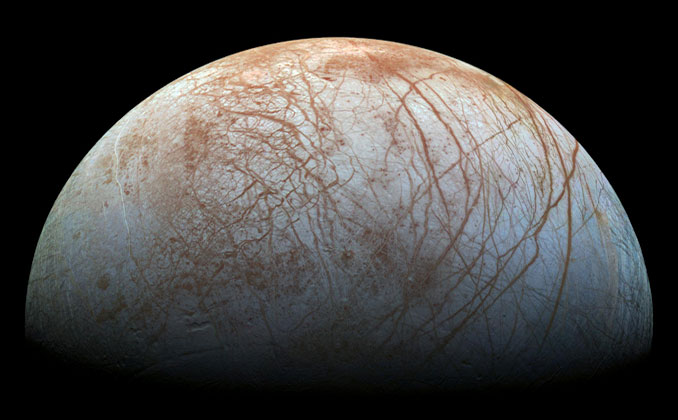 When it comes to the applications for swarms of robots being used for space exploration, the possibilities are as varied as the exploration of our solar system that has occurred over the last 60 years. However, actually carrying out these missions is something that will take new levels of engineering design. Because of the extreme environments beyond Earth’s atmosphere, any robotic explorer requires a design unique to its mission. Additionally, to build a swarm of hundreds or thousands of small robots that meet these design criteria means designing for production on a very large scale.

Motiv Space Systems has been working to develop key robotics technology capable of operating in the harsh environments found in space. From the design of robotic manipulators for use in low Earth orbit to the robotic arm that has enabled the success of the Perseverance rover, we understand the importance of designing a robotic system to meet very specific environmental and mission requirements.

The potential to expand exploration of our solar system to the oceans, atmospheres, and underground regions of extraterrestrial bodies through the use of robotic swarms provides an interesting prospect. Being able to utilize the capabilities of hundreds or thousands of individual micro-robots working together toward a common exploration goal will help scientists and engineers on Earth better understand the mysteries of the solar system. And with our extensive portfolio of space robotics, Motiv is ready to contribute to these exploration goals.

Build The Future of Space with Us

Your application has been submitted.